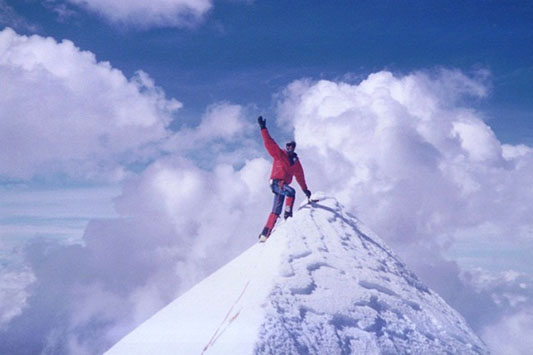 Man vs. Mt. Everest: Deadly Days on the Ascent to the Summit

With Friday’s release of the $65-million, 3-D epic Everest, we’re taking a look at some of the real-life tragedies that have occurred on the climb to the top of the world.

Since 1922, when the first recorded attempt was made to reach its 29,035-foot peak, Mt. Everest has become the quintessential symbol of humankind’s struggle to overcome its surroundings. But nature is not easily tamed, and as has been proven time and again, from that early expedition to the present, Everest is no exception. As much as the reaching of its summit—among the highest physical points on earth—has become intertwined with our notions of and language for achievement, so can its dangers inspire a sense of frailty and act as a reminder of our insignificance when viewed on even a geologic scale. Since May 29, 1953, when Edmund Hillary and Tenzing Norgay became the first to successfully reach the top of Everest, more than 10,000 people have been drawn to its heights. But while advances in technology have made the summit more attainable, fewer than half of those who have attempted it have been successful. Of these, more than 250 have lost their lives on the mountain.

Whatever its lessons, Sagarmāthā—as it is known in Nepal—continues to captivate, as illustrated by the upcoming release of director Baltasar Kormákur’s $65-million, 3-D epic, Everest. With a cast that features Jake Gyllenhaal, Jason Clarke, Josh Brolin and Michael Kelly, the film focuses on one of the deadliest days in the mountain’s history, May 10, 1996, when four separate groups of varying nationalities and levels of experience converged at the top. As members of each of the expeditions attempted the summit around the same time, a bottleneck effect occurred and the sudden onset of a blizzard shrouded them in a dark blanket of snow, with temperatures dropping to more than 40 below zero, trapping many on the peak. When the storm had passed, eight had died from exposure, bringing the number of deaths on Everest that season to 12, the highest on the mountain up to that time. Among those that survived the ordeal was Jonathan Krakauer, whose 1997 best seller Into Thin Air was the first to recount the events of that fateful day.

More recently, on April 25, 2015, a 7.8 magnitude earthquake hit Nepal, claiming more than 7,000 lives. Among them were an estimated 19 expedition members who were buried by an avalanche at Everest Base Camp, where they had been preparing for an ascent of the famed peak. The loss of life made it the most deadly day in Everest’s history and, for the first time in more than 40 years, resulted in the halting of any further expeditions for the remainder of the season.

One conspicuous fact regarding the dead from that day was that 10 were members of the Sherpa community who had been hired to ferry their primarily Western clients through the mountain’s treacherous terrain. Little more than a year earlier, on April 18, 2014, a similar tragedy had occurred, when a massive block of ice the size of a multistory building broke off above the treacherous Khumbu Icefall, setting off an avalanche that sent 16 Sherpas—who had been hired as part of a Discovery Channel expedition to film the world’s first wingsuit jump—to their deaths. In the aftermath, many Sherpas refused to climb the mountain, both out of respect for their fallen colleagues and in protest of the exploitative business practices that frequently results in a Sherpa guide or porter being paid as little as $2,000 a season to risk their lives on an expedition for which a Western guide may earn upwards of $50,000.

These calculated risks, however, were nothing new to the Sherpa community and have their historical roots in colonial imperialism. Indeed, the earliest British expeditions to Everest recruited the Sherpas as guides and as porters tasked with the backbreaking work of hauling an often massive quantity of gear up the mountainside, and from the beginning were to bear the brunt of the mountain’s wrath.

In June 1922, a British summit expedition led by Charles Bruce and including alpinist George Mallory was hit by an avalanche that swept nine Sherpas into a deep chasm. Two were found alive and rescued, but the others perished and, despite several attempts, the summit was never reached. Two years later, on a second attempt, Mallory and his climbing partner Andrew Irvine would disappear on the mountain. Mallory’s body would not be recovered until 1999, when it was found by a research expedition sponsored by the BBC. The resulting forensic investigation revealed that Mallory had likely died from a fall. Irvine’s body was never found.

In recent years, concerns about overcrowding, pollution and the potentially disastrous effects that climate change could have on the mountain have led many climbers, naturalists and scientists to call for the closing of Everest to human traffic, echoing the sentiments of Edmund Hillary, who after his historic ascent said that he hoped the Nepalese government would take measures to “give the mountain a rest for a few years.” Given the region’s economic reliance on alpine tourism and the ongoing willingness of the wealthy to pay for access to Everest, such measures seem unlikely to be taken anytime soon. In August 2015, just months after the greatest loss of life on the mountain to date, Everest was officially “open for business.”

The top or highest ​point, esp. of a mountain

A meeting of government ​leaders from several countries

The pointed ​top of a ​mountain, or the ​mountain itself

To reach the ​highest ​point, ​value, or ​level

Out sales have peaked

Representing the most ​perfect or most ​typical ​example of something

To work hard to do something

To move with ​difficulty

They struggle through a thick forest

(​especially of ​animals) not ​wild or ​dangerous, either ​naturally or because of ​training or ​long ​involvement with ​humans

An organized ​journey for a ​particular ​purpose

The people, ​vehicles, ​animals, etc. taking ​part in an expedition

During holidays I go on shopping expeditions

To ​twist or be ​twisted together, or to be ​connected so as to be ​difficult to ​separate

The bride and groom’s fingers were intertwined

Despite his frailty, he ​continued to ​travel.

To achieve something difficult to do or ​obtain

That country attained its independence two years ago

To ​hold the ​attention of someone by being ​extremely ​interesting, ​exciting, ​pleasant, or ​attractive

He was a captivating speaker

To ​draw ​pictures for a ​book, ​magazine, etc

To show the ​meaning or ​truth of something more ​clearly, ​especially by giving ​examples

Later experiments illustrated the proof of her claim

If ​lines, ​roads, or ​paths converge, they ​move towards the same ​point where they ​join or ​meet

If ​ideas and ​opinions converge, they ​gradually ​become​similar

To come from other ​places to ​meet in a ​particular ​place

۱۰۰,۰۰۰ people are ​expected to converge on the ​town for the ​festival

We began our hike in a blinding blizzard

A ​cloth or ​long, ​loose ​piece of ​clothing that is used to ​wrap a ​dead ​body before it is ​buried.

A ​layer of something that ​covers or ​surrounds something

A ​situation that ​prevents something from being ​known or ​understood

To ​hide something by ​covering or ​surrounding it

Uncertainty shrouds the identity of the corpse

The media gave him a through exposure

He died of exposure

An ​experience that is very ​painful, ​difficult, or ​tiring

Facing with my bad-tempered teacher was quite an ordeal.

Having a very ​important and often ​negative ​effect on the ​future

In 1971, President Richard Nixon made a fateful ​decision to ​install​ tape ​recorders in the ​White ​House

To ​describe the ​particular ​events of an ​experience, or to ​tell a ​story

They were busy recounting all their victories

To put a ​dead ​body into the ​ground

To bury something is also to put it into the ​ground

They decided to bury their feud

Bury yourself in sht

To give all ​your ​attention to something

She has ​buried herself in her ​work

A ​large ​amount of ​ice, ​snow, ​dirt, or ​rock ​falling ​suddenly and ​quickly down the ​side of a ​mountain

An avalanche is also the ​sudden ​arrival of too many things

My desk is buried under an avalanche of letters

The ​state of being ​known for having or doing something ​important

During his own lifetime, the fame of Hafez had even reached India

A ​boat or ​ship for taking ​passengers and often ​vehicles​across an ​area of ​water, esp. as a ​regular ​service

To ​transport someone or something ​repeatedly or ​regularly

I ​spend most of my ​time ferrying the ​children around

If the ​ground or ​sea is treacherous, it is ​extremely ​dangerous, ​especially because of ​bad ​weather ​conditions

A ​person who is treacherous ​deceives someone who ​trusts them, or has no ​loyalty

Snow and ​ice have ​left many ​roads treacherous, and ​drivers are ​warned to use ​caution

​involving a ​period of ​political ​control by a more ​powerful ​country

a ​person from another ​country who ​lives in a ​colony, ​especially as ​part of ​its ​system of ​government

The colonial were against heavy taxes.

to ​persuade someone to ​work for a ​company or ​become a new ​member of an ​organization, ​especially the ​army

to ​die, ​especially in an ​accident or by being ​killed, or to be ​destroyed

the state of ​depending on or ​trusting in something or someone

My reliance is on God alone

Want to join the discussion?
Feel free to contribute!